It’s been a while since our last post; we’ve been very busy but plan to write more often!! To get back into things we’re revisiting the theme of Meet The Staff,  where we introduce a member of the Anokhi Museum of Hand Printing (AMHP) team. Last time we chatted to Jitendra and Pavan, the museum supervisors.  This time the spotlight is on one of the museum’s two block printers….

Meet Salim (we asked for his full name and  apparently that’s it)!  Salim took up his position as museum block printer in July 2015 and joins our charismatic printer Iqbal in the demonstration area (we’ll be writing about Iqbal another time!). Chatty and sociable, Salim seems to be enjoying his dual role as printer and demonstrator.  We joined him in his work space to find out what he thinks of life in a museum and to learn a little bit more about him. 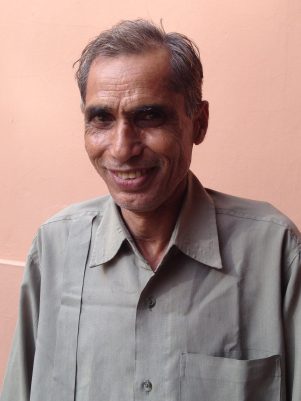 Salim’s hometown is Farrukhabad, a renowned block printing and carving town in the state of Uttar Pradesh. He grew up in a neighbourhood surrounded by craftworkers. Salim’s father was also a printer but he points out that he didn’t learn the craft at home. “I picked things up on the job from other printers, just being around them all, watching and practicing. Everyone in that area was printing. There were plenty of others my age. We all learned together. “

After a brief stint in Delhi, Salim moved to Sanganer – another historic printing town, just outside Jaipur. Work was scarce in Farrukhabad but Sanganer’s block printing industry was flourishing.  Now 59 years old, he has been living and printing there for almost 40 years until his recent work move to AMHP, Amber  – on the opposite side of Jaipur. His two brothers are in the same line of work not far away. His son is a block printer too – an encouraging sign that the next generation has also engaged with the craft!

The museum must be a real change, much calmer than the hustle and bustle of Sanganer? ” I’m older now, ” he reflects, “and this work is more relaxed compared to work in a printing unit. I demonstrate to visitors or work on a small order, but it’s unhurried. I like new people coming to see me work and I feel happy when some of the visitors call me Guru! I am very happy here.” Often associated with a spiritual guide, guru is also synonymous with expert or authority. After four decades of stamping cloth, Salim is undoubtedly a skilled craftsman and, proud of his heritage. He is happy to put on a bit of a show and share his expertise with the many enthusiastic onlookers who pass through. He is very pleased to see ‘his craft’ in this kind of setting, in a museum dedicated to block printing. “It makes me proud that people are interested in what I do for a living.”

Salim has a nice routine – demonstrations throughout the morning, printing orders in the afternoon. He’ll stay doing this until he retires. And then? He’ll probably return to Farrukhabad. He still has plenty of family there and returns several times a year for festivals and special family gatherings.

During his chai breaks he can be spotted scurrying down the corridor to have a chat with the museum’s equally affable block carver, Mujeeb Khan. Mujeeb is also from Farrukhabad and about the same age. The two have much in common and plenty to chat about. But that’s another story!